This 544-page book contains Eight generations of Tijerina focusing on the descendants of Gregorio Fernandez de Tijerina and Beatriz Gonzalez Hidalgo. Gregorio was born in the early 1600s and is believed that he arrived in El Nuevo Reino de Leon (Nuevo Leon) before 1625. He is considered to be the progenitor of the Tijerina surname in Coahuila, Nuevo Leon, Tamaulipas, and Texas. This book contains information from the 1640s through the early 1900s.

From this marriage nine children were born: Andres, Gregorio, Leonor, Maria, Melchora, Micaela, Catalina, Nicolasa, Beatriz, Juana, and Margarita. As you can see, they had more daughters than sons and thus that is the reason that this book contains many descendants whose surnames are not Tijerina. Their daughters married with sons of other prominent families of Nuevo Leon and are also included in this book.

Gregorio is considered to be a conquistador and early settler of El Nuevo Reino de Leon. He was also a miner who made discoveries in Cerralvo and Cerro de las Mitras. He had several political post including Alcalde Mayor of Valle de las Salinas and Regidor of the city council of Monterrey. 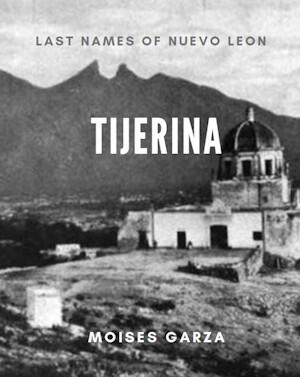