This 160-page book contains information about the earliest mentions of the Last Name Tanguma in Nuevo Leon. To date, I have not been able to find one single root for the last name Tanguma. Due to this reason, this book contains forty-four families predating the 1780's.

Twenty-two of them are by Tanguma males and the other twenty-two are by Tanguma females. I hope that this book makes it easier for you to link to one of these forty-four branches.

Also, that it serves to encourage other researchers to dig further to try and identify the root of this last name that eventually spread from Nuevo Leon to Tamaulipas, Texas and beyond.

My interest for putting this book together is that my mother is a Tanguma and I have always been fascinated by this last name. Through my research I have also come to find out that this last name is carried by people who descend from African ancestors. You will find references in the records such as morisco (Spanish and mulato) and mulato (black and Spanish). Many are also listed as collotos (mestizo and Indian) and mestizos (Spanish and Indian). I have yet to find early records that mention them as full Spaniards. I find this fascinating since I truly believe that our ancestors were probably African slaves that were brought into Mexico. Our Tanguma ancestors bring an additional flavor to the colorful ancestry that we has Hispanics have and that we can see in our DNA.

While putting this book together I searched the Monterrey archives for the earliest mention of a Tanguma in their records. The oldest one was a criminal case dated May 23, 1659 that is 12 pages long and it is a criminal case brought on by captain Blas de la Garza against a mulato named Nicolas who was the son of mulato Tanguma. This case was for stealing and fighting with Indians from the Hacinda of San Francisco.

The second earliest record that I found was a marriage dated May 8, 1685 and it is that of Maria Tangumba (mulata libre) marrying Juan de la Cruz (indio).

The third earliest record that I found was a protocol record dated September 2, 1692 Volume V Fol. 79 No. 35 of a Diego Tanguma buying property in the Santa Catalina area.

One can only assume that this last name arrived in Nuevo Leon in the middle of the 1600’s. We know for sure that this last name made it’s way to Tamaulipas in 1750 since in the Reynosa census of that year we find a negro libre along with his family listed among the founding families. I also believe that this couples children are the same Tangumas that we find in ciudad Mier getting married in the 1760’s but I have no proof since their names have a slight variation.

As I mentioned before I have not been able to find one common ancestor but have identified forty-four couples that predate the 1780’s and of which I assume that most Tanguma descend from. This book is not the end of my research, I will continue to research it and hopefully we can one day identify a true progenitor for this last name in Nuevo Leon.

This book is an attempt at documenting this last name and hopefully helps others in their quest to finding their Tanguma ancestors.

To recap, this book contains information about the earliest mentions of the Last Name Tanguma in Nuevo Leon. You can use the button to your right top to buy this book today on Amazon. 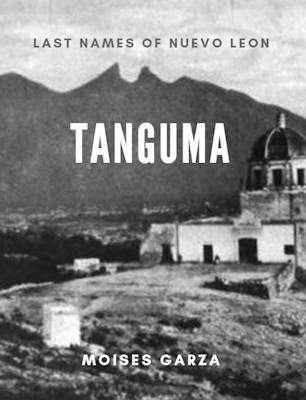