This 413-page book contains seven generations of descendants of Diego de Montemayor and his three wives Ines Rodriguez, Maria Esquivel, and Juana Porcallo de la Cerda. In 1596 Diego de Montemayor founded Monterrey and is also considered to be the progenitor of the Montemayor last name in Nuevo Leon, Tamaulipas, and Texas.

Diego de Montemayor is mentioned along Ines Rodriguez on the passenger lists as having sailed December 17, 1548 out of Sevilla and is listed as neighbor of Malaga the son of Juan de Montemayor and Mayor Hernandez.

In July 23, 1553 they baptized a daughter named Maria in Mexico City. It is believed that this Maria is the same Maria Ines Rodriguez that Married Baltazar de Sosa. Their two sons Diego Rodriguez and Lucas Garcia and their families are listed as coming with Diego de Montemayor to resettle Monterrey.

I mention this because there are researchers that doubt that Ines, the wife of Baltazar de Sosa, is the daughter of Diego de Montemayor. I, just like Eugenio del Hoyo and Guillermo Garmendia Leal based on current evidence, think that she is her daughter and as such have included her and her descendants in this book.

To recap, this book contains seven generations of descendants of Diego de Montemayor and his three wives Ines Rodriguez, Maria Esquivel, and Juana Porcallo de la Cerda. You can use the button to your right to buy this book today on Amazon. 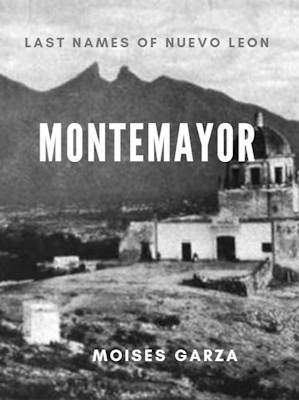 Learn about the progenitors of the last names Benavides, Chapa, De Leon, Hinojosa, Montemayor, Sepulveda, Treviño, and Villarreal in Nuevo Leon with our free introductory guide.