This 577-page book contains Seven generations of Cantu focusing on the descendants of Jeronimo Cantu and Juliana de Treviño. It also focuses on the descendants of Joseph Cantu and Maria de Treviño. Both, Jeronimo and Joseph are believed to have entered El Nuevo Reino de Leon (Nuevo Leon) in the early 1600s. They are considered to be the progenitors of the Cantu surname in Coahuila, Nuevo Leon, Tamaulipas, and Texas. This book contains information from the 1600s through the early 1800s.

I had always heard that the progenitors of the Cantu surname in Nuevo Leon were three brothers that came in the early 1600’s to El Nuevo Reino de Leon and that one of them was a priest. Their names were Jeronimo (Geronimo), Joseph (Jose, Juseph), and Lorenzo (the priest). Before writing this book I had not come across any evidence that they were brothers so I did some research and this is what I found.

According to Israel Cavazos Garza, Fray Lorenzo Cantu entered El Nuevo Reino de Leon in 1626 and he came from the convent of Charcas located in San Luis Potosi. He stablished the mission of San Jose del Rio Blanca nowadays Zaragoza.

In the book “Cedulario Autobiographico de pobladores y Conquistadores de Nuevo Leon”, Israel Cavazos Garza did an extract of a “causas” record where Tomas Cantu, the natural son of Jose Cantu, states that he was from Ramos and had been raised in this kingdom by his uncle Fray Lorenzo Cantu. One can conclude that then Joseph Cantu and Fray Lorenzo are brothers.

Then on the book “Catalogo y Sintesis de los Protocolos del Archivo Municipal de Monterrey 1599-1700”, Israel Cavazos Garza mentions a letter by Jose Cantu stating that his sister (sister in law), the wife of Jeronimo Cantu denounces the sale of the land mentioned in the record. In my opinion this record proves that Jose and Jeronimo are brothers.

These two records may not be proof enough to many but I think it is a great start, specially when there are many more records that I have to search through. It is also important to note that both of their wives are sisters and they are the daughters of Alonzo de Treviño and Anastacia Gonzalez Hidalgo Navarro.

This book starts with _____ Cantu as the father of Geronimo, Joseph, and Fray Lorenzo. I left him and his wife blank since I have yet to discover their names. I truly hope that you find this book useful in your research. Also keep in mind that this book is just a tool, it is still your responsibility to find copies of records and verify your lines. In this, I have  included citations for every fact listed in this book so that you may know where my information came from and for you to find records faster. 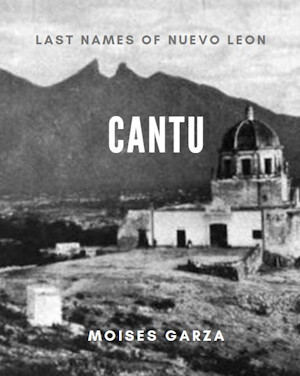