This book contains five generations of Canales focusing on the descendants of Blas Canales and Maria Benavides. Blas was born in about 1676 in Cerralvo, Nuevo Reino de Leon (Nuevo Leon). He is considered to be the progenitor of the Canales surname in Coahuila, Nuevo Leon, Tamaulipas, and Texas. This book contains information from the 1670s through the early late 1800s.

The first Canales in Nuevo Leon was Antonio Canales who was born in the early 1600s and was a merchant from Mexico City. Antonio had a son by the name of Jose Canales, also a merchant in Nuevo Leon. Both of them are mentioned in many records located in the archives of Monterrey. Researcher Tomas Mendirichaga Cueva in his book “Apellidos de Nuevo Leon Siglos XVI, XVII y XVIII” states that Jose Canales was probably the father if Juan Canales who married Gertrudis de Montemayor and Maria de Charles. He also states that Blas Canales was the son of Juan Canales and Gertrudis de Montemayor.

The Canales genealogy during the 1600s and early 1700s is not very clear cut. The reason for this is that the Canales settled in what is nowadays Agualeguas, Nuevo Leon. Cerralvo was the center of government for Agualeguas and unfortunately for us all the church records and local archives for Cerralvo are missing from its founding up until the 1760s.

It is for this reason that this book starts with Blas Canales and Maria Benavides and includes descendants on six children that I have been able to identify through primary and secondary sources. Keep in mind my research is not final and I continue to research in hopes of finding more children for them. 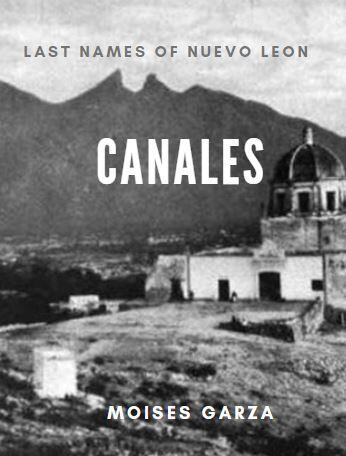