This book contains seven generations of the descendants of Lucas Caballero de los Olivos and Margarita Rodriguez de Montemayor. Lucas was born about 1640 in Puebla de los Angeles, Nueva Espana and entered Nuevo Leon prior to 1670. He is considered to be the progenitor of the Caballero surname in Coahuila, Nuevo Leon, Tamaulipas, and Texas. This book contains information from the 1640s through the early late 1800s.

Lucas was first married to Juana de Barraza the daughter of Juan de Barraza and Margarita de al Peña Arce. Juana made a will dated 16 Apr 1669 in Parras, Coahuila.

The main focus and the bulk of this work are the descendants of Lucas and Margarita.

Lucas died 02 Jul 1690 in Monterrey and is buried in the Parochial church of Monterrey, Nuevo Leon, Mexico.

Please do me a favor, use the buttons below to share this page so that more people find out about it. A huge thank you in advance, you are the best! - Moises Garza 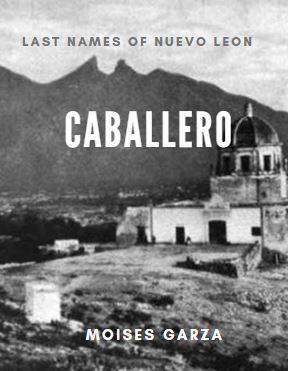