This 540-page book contains seven generations of descendants of Melchor Barrera and Mariana de Treviño. Melchor was born in about the year 1600 in San Vicente, Castilla, Spain. He entered El Nuevo Reyno de Leon (Nuevo Leon) prior to 1647 since he is mentioned as residing at El Real de las Salinas on March 16. 1647. Melchor is considered to be the progenitor of the Barrera surname in Coahuila, Nuevo Leon, Tamaulipas, and Texas. This book contains information from the 1640s through the middle 1850s.

Melchor was an scribano real (royal scribe) from time to time. It is also mentioned by Don Israel Cavazos Garza that he taught children to read and write.

In his will dated December 29, 1677 he mentions that he is the son of Juan Barrera and Beatriz Rodriguez and wishes to be buried at the parochial church of Monterrey “in the most humble part that could be found”.

He was married to Mariana de Treviño (also known as Mariana Navarro), who was the daughter of Alonzo de Trevino and Anastacia Gonzalez Hidalgo Navarro.

Melchor died on or before January 13, 1678 is buried in the Parochial church of Monterrey, Nuevo Leon, Mexico. 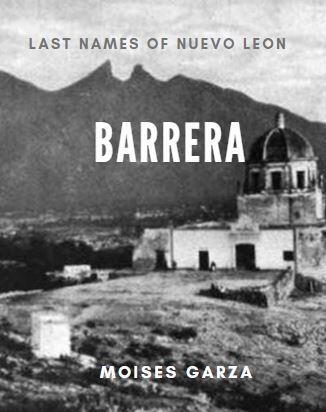